It’s still March… Anyways, this week: some more work from home stuff (free for non-members) about the top gear I have at hand, USB-C hub power drain on iPad Pros, Zoom, UPS backups — then we jump over to a bunch of iPad Pro specific topics for members.

Something rather comical I keep seeing on the “EDC” (everyday carry) SubReddit is people posting ‘my WFH EDC’ or ‘my quarantine EDC’ — now this sub is rather repetitive to begin with – but these posts are particularly amusing. The idea that you need a wallet, two knives, a multitool, and a gun in order to move around your home — well that is a special kind of ‘grow up’ for me. But it did get me thinking how what I carry around has changed.

Truth be told, I don’t really keep anything in my pockets when I am home, and if I am carrying something it is probably my iPad Pro — not even my iPhone that often. But, that doesn’t mean I don’t have a setup for myself, because I did find that as I worked throughout the day I needed things to help me. My home office is right next to the front door, and my wife and I have agreed that when a package comes I will open it at the door, dispose of the outer boxing, clean my hands and then distribute the delivery. For that I need a knife, but you know, I am not carrying one around my home because I don’t post to r/EDC — which is how this little area of my office formed: 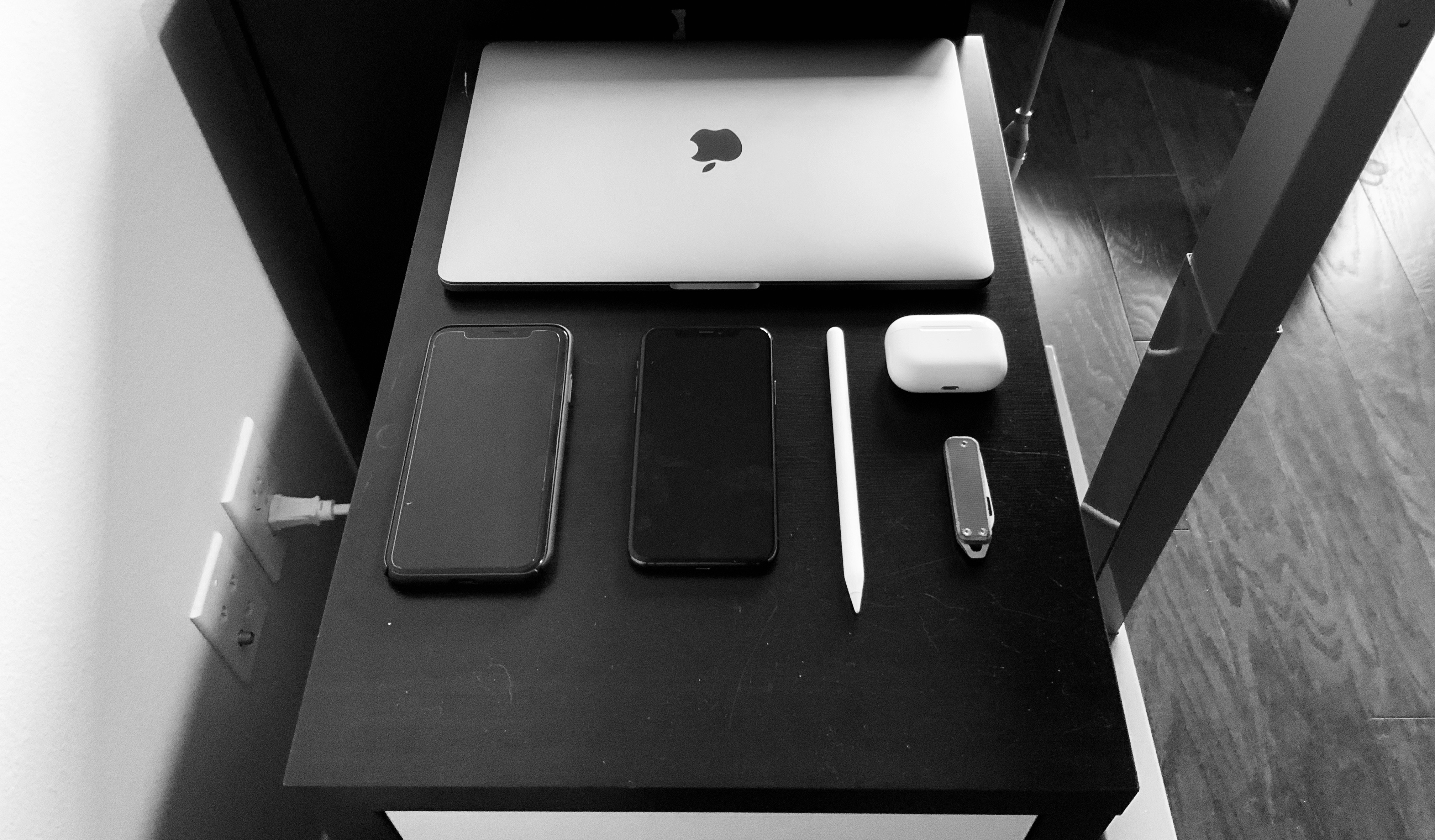 That’s a cabinet of drawers which sits to the left of my desk. It started the new WFH mandates with just the work issued MacBook Pro sitting on it — it’s the perfect size! — and then it morphed from there. I dropped my work and personal phone there, and that looked neat. Turns out having my AirPods Pro on that spot kept me from having to shuffle around looking for them before every call. I added the James Brand Elko knife so I could open packages — you don’t need more than that. And that’s the Apple Pencil for my personal iPad Pro — in case I need it.

And I know what you are thinking: “I staged that for this blog post” and you are totally right. But what I staged was using a ruler to try and really make things aligned (I still messed that up), but in reality all those items really do sit there, really do sit in that arrangement and are almost always as neat and tidy as I can eyeball them. BECAUSE I HAVE SOME EXTRA TIME ON MY HANDS PEOPLE.

The thing is, I need those items, but not that often. I need the MacBook Pro to test some web apps, but maybe once a week at most. I need my work and personal iPhones, but maybe once a day. I use that knife about 3-4 times a day — deliveries seem to be constant right now, we got three different FedEx trucks on Friday alone. I rarely use the personal Apple Pencil, but I am trying to use it more so that’s a reminder.

And those Airpods Pro are like work from home magic — you should totally get them. I keep a charging cable stashed off to the side for the MacBook Pro and the Airpods Pro so that they don’t ever have to leave that spot.

For me, this is not about what I carry on me (again, just the iPad Pro), but rather what I need at hand. And those are the items I have found that I need at hand. Yours may vary, but having them all in a neat area, arranged with extra compulsion, well that’s been nice for me.

And since you are wondering, this is what my desk setup looks like when I am working during the week: 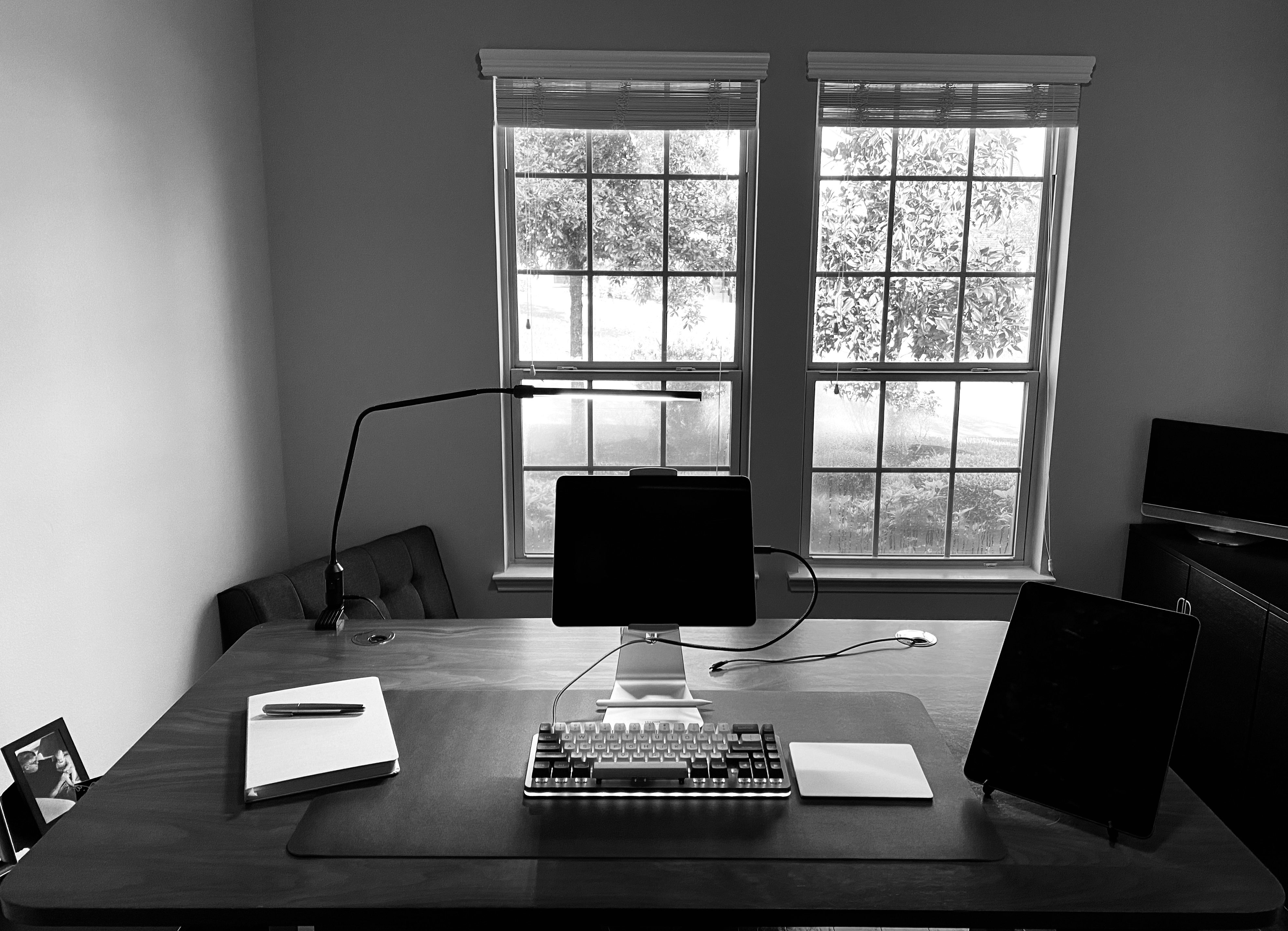 And today, as I write these posts, here’s what it looks like: 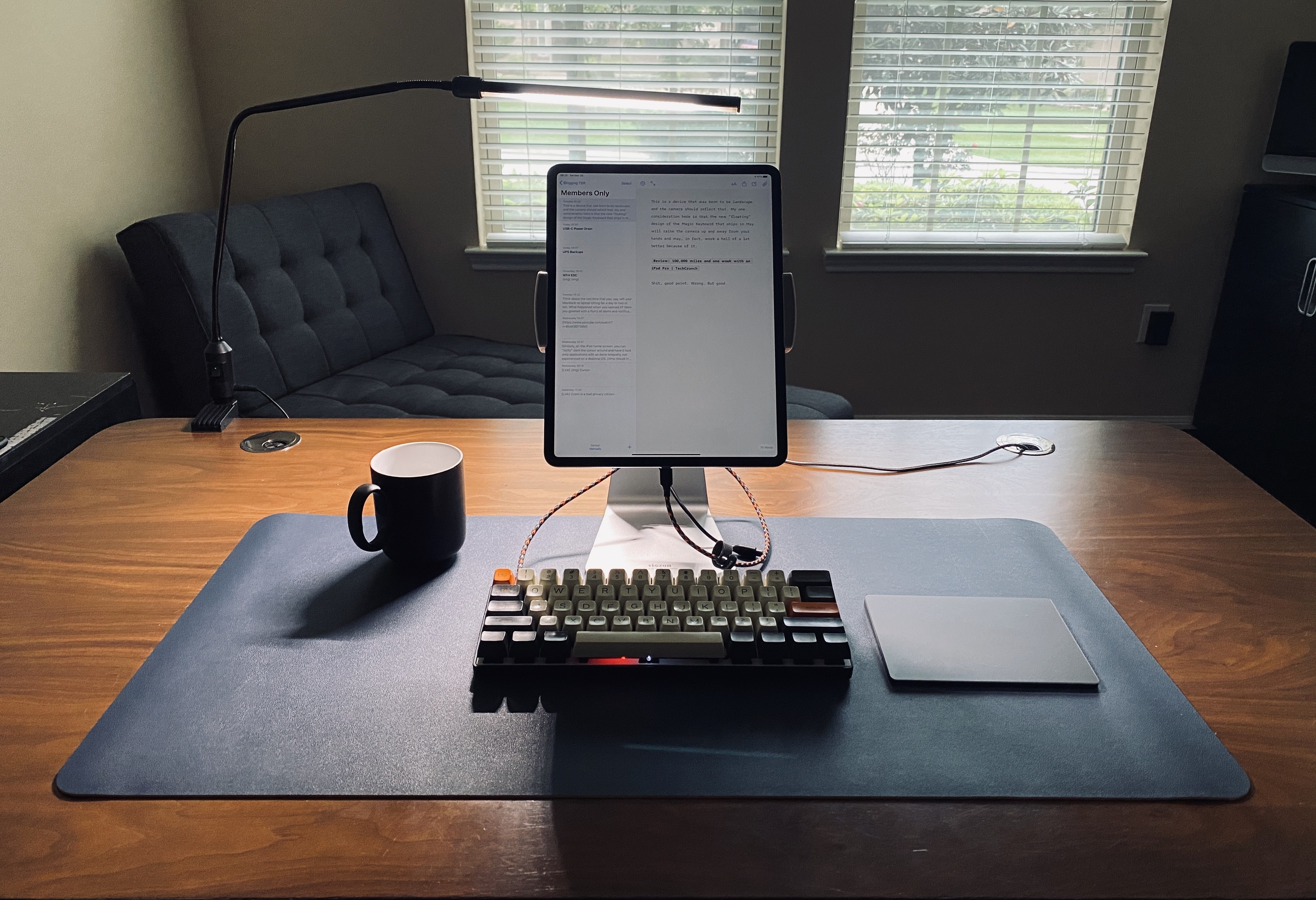 Coffee, Pok3er, Viozon stand with personal iPad Pro, and Magic Trackpad. And, yes, that little tool spot to the left of my desk, it holds different items on the weekend (I’ve got time people). You always need context shifts, which is why I changed the keyboard when I work on personal stuff, and took the time to completely put away my other keyboard in a cabinet. It tells my brain to get into writing mode, out of manager mode.

One last note about my desks, because I know what type of emails people send me, the desk pad is this one, in blue. It was a sub $20 thing that made me happy-ish. It’s not super high quality or that impressive, but I wanted to know if a desk pad was something I wanted or not, before I went out and bought a nice one from Grovemade. I am still making up my mind on this, but the answer is likely: no, unnecessary.

Speaking of work from home stuff, I have been having some issues with my USB-C hub, it is a ‘cost effective’ UTechSmart USB-C hub that I attached to my iPad Pro with a ‘cost effective’ USB-C extension cable. From there I had my keyboard plugged in, as well as power off and on. But the battery life on my iPad Pro has been crazy bad going from 100% to 39% in about 2 hours. I know it is not my keyboard, because I use that at my office directly plugged in all the time. The only other variables would be:

So I decided to eliminate the hub and charged the iPad back up. I switched to a Bluetooth keyboard so I could keep working — my battery life span went back to normal. The USB-C hub, when not providing constant power to the iPad Pro is murdering the battery life.

So, it could be the extension cable, it could be the hub — it’s probably both. But before I go out and spend a bunch of money on this: if anyone has a really great USB-C hub that they love using with their iPad Pro? Let me know.

I have been reading around and it seems the TwelveSouth hub is one of the best as it offers a detachable USB-C cable so that you can place the location of the hub somewhere that is not dangling from my iPad Pro. And the reason I don’t constantly charge my iPad Pro battery? Well I am guessing that would not be good for long term battery life. But, educate me if I am wrong here, but leaving my iPad Pro plugged into power for 8 hours a day seems like it would not be good overall. (And internet research on this topic is shit.)

Zoom, to Good to Be True?

Zoom has been a hero during this work from home worldwide experiment. It has amazingly stayed up, and somehow not really pissed anyone off or done anything stupid. So while this article tries to tamp the hype, it’s actually not as abnormal as you might think.

Basically, Zoom’s mobile app uses Facebook’s Graph API — likely to record as many analytics as can be had. This could be so they can make more informed product decisions, and this could be because data is data, and they want the data. It is likely both, and likely nothing they did with evil intentions. (A lot of times this stuff is added to commercial apps by developers pushing for them because they are asked to fix crashes without having access to users, and so they need as much possible information so they can actually fix bugs. So they choose a robust tool like this, without thinking through what else the tool itself might be collecting because they are trying to solve a problem right now.)

So is Zoom too good to be true? No, but they should reconsider using Facebook tools to get what they need.

At most, Zoom is a bad privacy citizen. But that’s not surprising given that they have a Freemium model and they give meeting hosts a ton of tools to tell what is going on in their meetings.

What should you use instead: when and where possible FaceTime will always be your best bet. My company uses Teams, and I have to say the video calling is good quality with shit extras. I would prefer being tracked by Zoom.

Not the delivery service, this is not about FedEx, but uninterruptible power supplies — battery backup surge protectors. I was reminded of my lax setup last night when the power went off in quite the dramatic sequence. Came back on a bit later, and then went off again — it did this a few times over the night. I have long kept a UPS on my internet setup so that I never really lose WiFi when the power goes out.

This has been important in most of my houses as they have all had poor cell reception. The house we are currently in has the worst reception and yet last night I was reminded that my router stays up, but not the gigabit fiber connection. Because coming into the house is another part of the internet chain which needs power. So I picked up another UPS for that part to keep my entire network up when the power goes out.

With everyone working at home, you should probably grab a UPS (CyberPower gets my vote, I have one of these) and that way you can at least have internet to find out why the power is out and possibly for how long. The bigger the UPS, the longer the WiFi stays on, and usually the more likely it is to have a gauge to tell you how long. I would buy something larger than what I have, but mine meets my needs.

One last pro tip: know how to turn off the alarm sound on your UPS, otherwise you will lose your mind one beep at a time. Oh, and just budget for needing to replace these every 12-18 months — they suck like that.

You must be a member to read the rest of this article. (Already a member? Log In.)