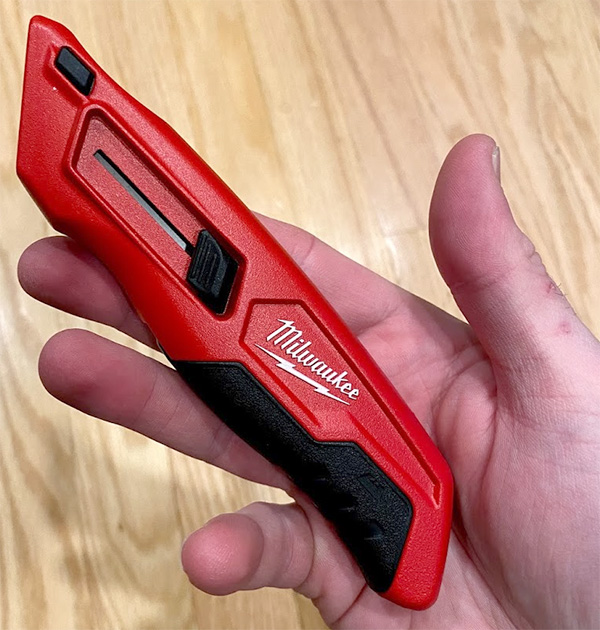 I have posted about Milwaukees side-slide utility knife before, and gave a couple away recently. Its a very easy to use knife, and one that I have really grown to like.

I gave one to my father some time back for around-the-house tasks, as its easy to operate, and I considered it an upgrade over the more basic standard-style knives he had been using.

I kept mine in a kitchen cabinet, but it has been known to travel with me to the garage and elsewhere. I saykept because I misplaced my well-worn but much-loved knife.

My efforts to locate the missing knife have been unsuccessful, and so it seemed like a good time for the new model to take its place.

Theres no way gentle way to say this I really dont like the new version of this knife. The new knife forgive the awkward pose is shown in the image above.

Objectively, the new knife is better in a lot of ways. It feels very solid, and every feature seems to have been tweaked. Theres no cord or wire-cutting function, but thats not something I used with the older version, although I have used similar features on other knives.

The blade storage compartment door feels more secure, although I cant locate my older version knife at the moment and still have to dig up a backup. I gave away two of these knives, new in packaging, as part of the recent giveaways, purchased because I like sharing my favorite tools.

The blade extension and retraction mechanism is what I have problems with.

Milwaukee advertises the knife as havingmaximum control, and that is what you get. The extension mechanism locks the blade in place very securely and positively, with a *click* that you can feel. The problem is that spring tension and that positional security make the knife a little slower to open and a lot slower to close.

For a lot of what we use this knife for, mainly opening boxes or breaking down cardboard for recycling, the knife might be opened and closed quite a few times during a usage session. Ill use it, close it, place it my back pocket, and then bring it out again a moment later. Im not going to be able to do that with this knife.

This was a review sample, but Im not getting rid of it. Even though Ill be resuming efforts to track down my misplaced older-version knife (or a backup Im sure to have somewhere), this knife will work perfectly for other needs.

Milwaukee really did a good job on the blades extension mechanism, and I dont think any of my other utility knives have as good a blade positional system.

Have you ever had a retractable utility knife blade slip on you, where you want a shallow or mid-length blade and it pulls out to maximum extension and cutting depth? In my opinion that type of issue is going to be extremely rare or even non-existent with this knife.

Yes, the new version offers maximum control, but its too great a departure from the ergonomics Im used to with the holder version. With the older knife, there was perhaps a balance between ease of use, speed of use, and blade extension control and security. With this new knife, the scale tips much more towards blade control, with ease and speed of use somewhat compromised.

With the older knife, I could open it and be ready for a cutting task faster than with a folding utility knife. With the new one, that wont be the case. Or, if it is, closing the knife certainly does take longer.

To close this new version of the knife, you have to consciously push down on the retraction button and then pull it back.

Not every utility knife is going to be a perfect fit for every user.

My problem with this knife, or at least my initial impression issues with this knife, is that its not the same knife that Im used to. I expected this new model to closely follow the functionality and ergonomic traits of its predecessor, but the changes are so great that it could perhaps be considered a brand new knife.

If this was my first experience with a Milwaukee side-slide knife, Id probably comment about the retractable blade mechanism being a little stiff, but very secure.

But because I had expectations and such strong favor for the preceding model, Im instead thinking about how much I dislike the changes and wondering about what Im going to do if I cant find my older model. What if I gave away my backup and its 3 siblings I bought at the same time?

It seems to be a good knife, and I can understand and appreciate the improvements that were implemented. But me and my apparently wimpy thumb were much happier with the older version.

My wife was also a frequent user of my Milwaukee side-slide knife. I havent given her the new knife to try yet, but I know shes going to have trouble with it too.

There are only a couple of user reviews online right now, most of them free sample program reviews, but it seems Im not alone in finding the side-slide mechanism to be stiff to close. One user review says that it broke in for them, so maybe thats what Ive got to do, but this was never necessary on the older version.

If spring tension is the problem here, then it might soften up with some use. If not, perhaps theres some way to coax it into softening up.

Ergonomically speaking, this new knife is not a drop-in replacement for the old version of similar design. Thats okay, and I know that a lot of users will be fine with the switch and even love the improved positive position locks.

If I dont get used to the stronger lock, this knife will probably migrate to the garage or basement for continued service, and Im going to throw a fit if I cant find my older knife (or a new replacement of the older design) to go into the kitchen tool cabinet.

The knife retails for $8, and comes with a single blade. Theres a tool-free blade change holder and built-in blade storage for up to 5 blades (not included).

Honestly, what can I say? Its new and improved, and I really dont it. Its not flawed or defective, its just not compatible for my needs, wants, and usage tendencies, which sometimes happens with construction-oriented tools (such as tape measures with super-strong wind-up springs).

It seems like a good knife, just not for me.