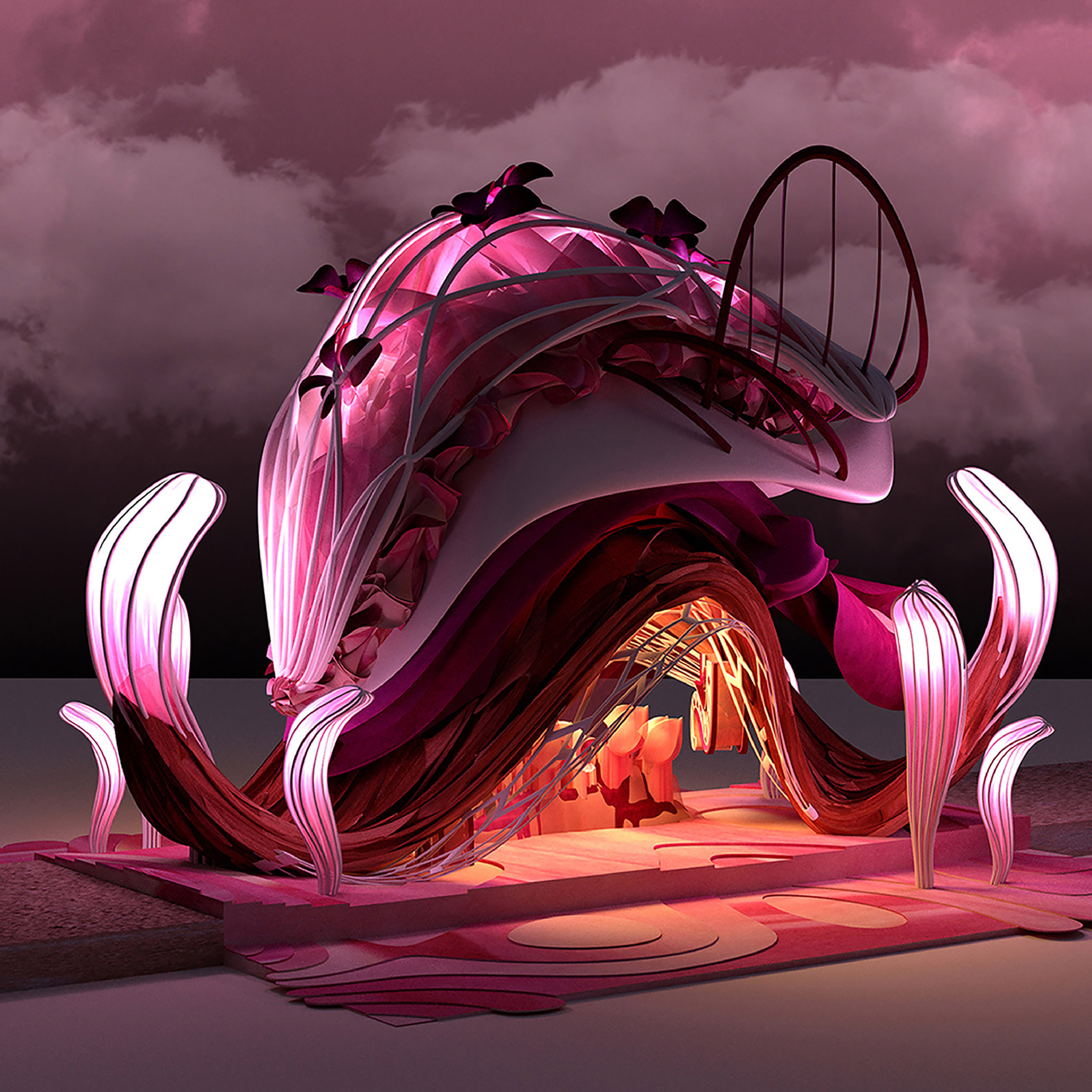 An educational programme based on a train and a cultural funhouse are included in Dezeen's latest school show by students at Chulalongkorn University, Thailand.

Also featured is a digital display exploring the river species in the Gulf of Thailand and a bus stop that also functions as a florist.

"INDA is the International Programme in Design and Architecture of Chulalongkorn University in Bangkok, Thailand. It aims to nurture diversity in design approaches and methodologies based on a clear framework of constructive dialogue.

"The school is a four-year bachelor programme with a strong emphasis on design studios through architectural design, topics and methodologies relevant to contemporary architecture, with a particular focus on South East Asian dynamics and specificities. Although INDA has adopted architecture as its main course topic, it aims to show how architecture connects to other disciplines, such as landscape architecture and urban design.

"INDA Parade is the main event of the school held at the end of each academic year. It aims to enable the community of students, instructors, alumni, guests and the public to discover and celebrate students' works collectively as an ongoing conversation.

"Today, we are bridging between physical reality, AR/VR, and online platforms for communication. INDA annual student show, INDA Parade 2021 – The Butterfly Dream represents the seamless dialogues between these realities." 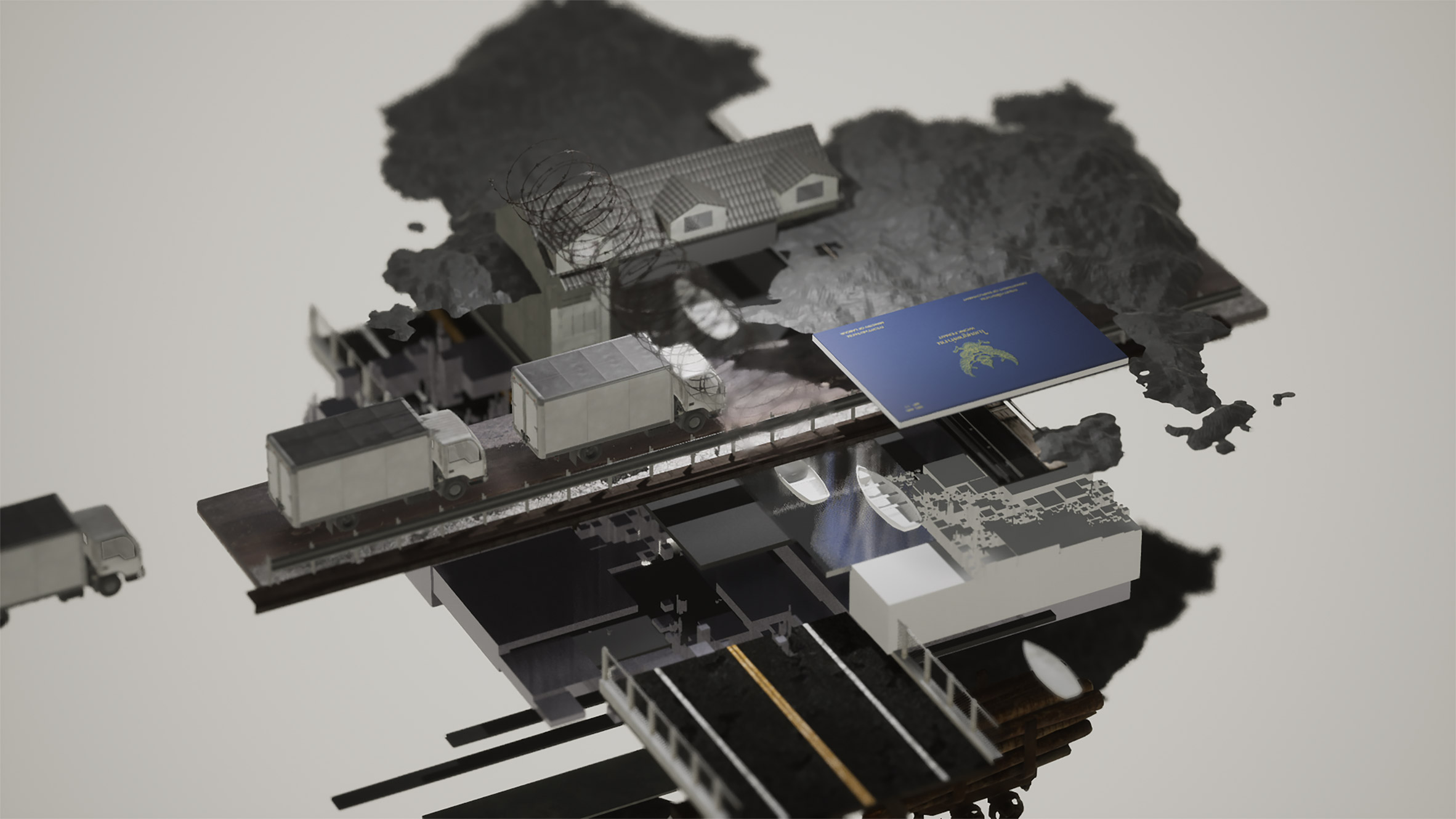 "Atlas is an autonomous digital platform created to govern change and enable the flow of data. To map time, the transaction, proposition, and interaction of our nature are discussed without making assumptions. Different systems and ideas of ownership are contextualised in various layers.

"Where the hierarchies of each layer are established through their relevancy among each inhabiting entity. Usage of the 'map' is done in parallel with the simulation of time, allowing us to envision the consequences of each decision consciously.

"Each map becomes an artefact of dialogue, an archive of the past discussion and simulation of the future." 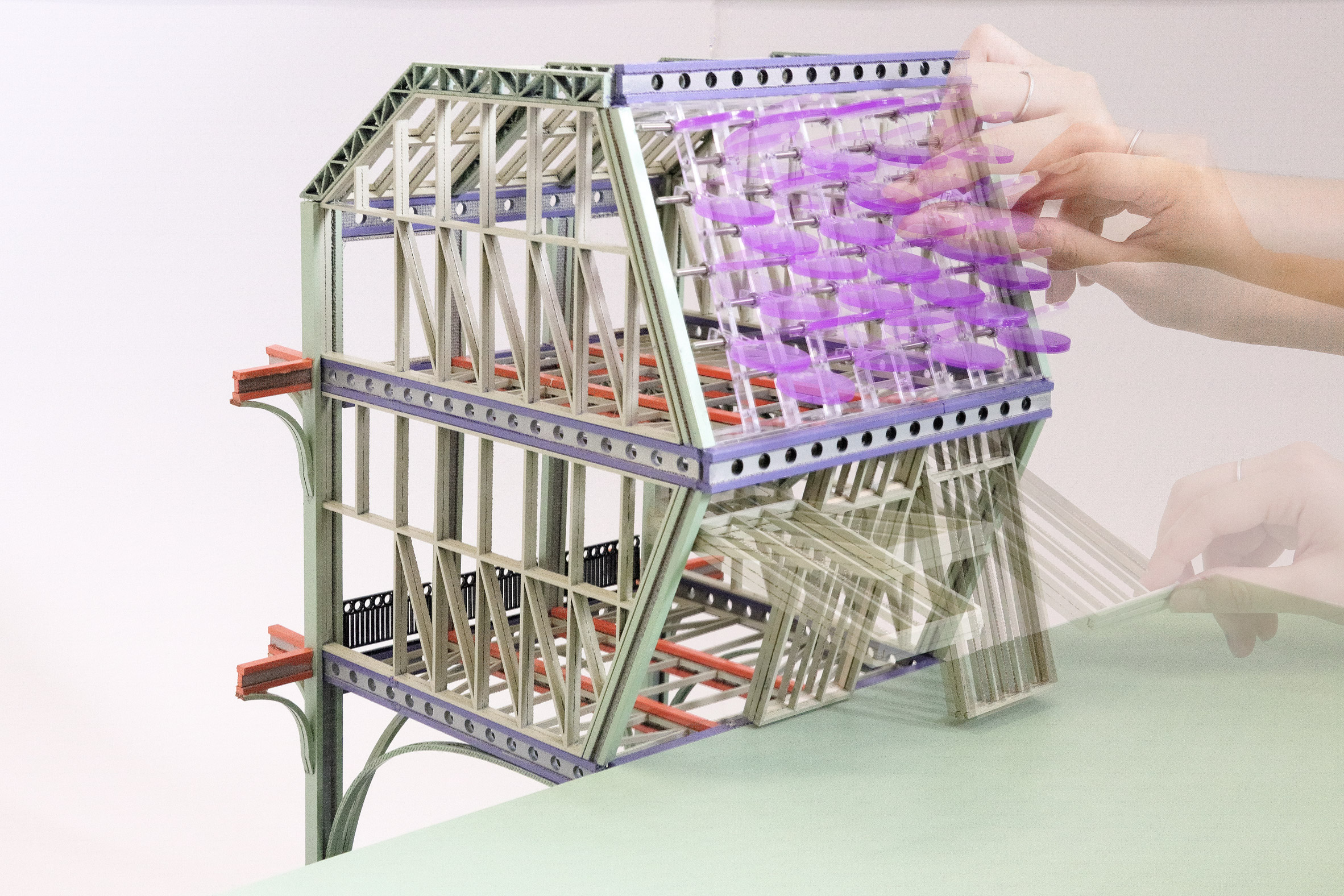 "The 'Bureau of the Urban Commons' is redefining the rule of engagement within the public realm of Bangkok through a series of civic-scale interventions that stitch the urban fabric vertically and horizontally.

"The project capitalises on the spatial potential of The Green Mile, a hidden 1.3-kilometre linear bridge that stitches across central Bangkok. It deploys multi-level connectivity strategies to promote active participation and co-creation engagement, operating on a feedback system expressed through the performative structures. Where along with the commonalities throughout the Green Mile, our everyday life would never be the same." 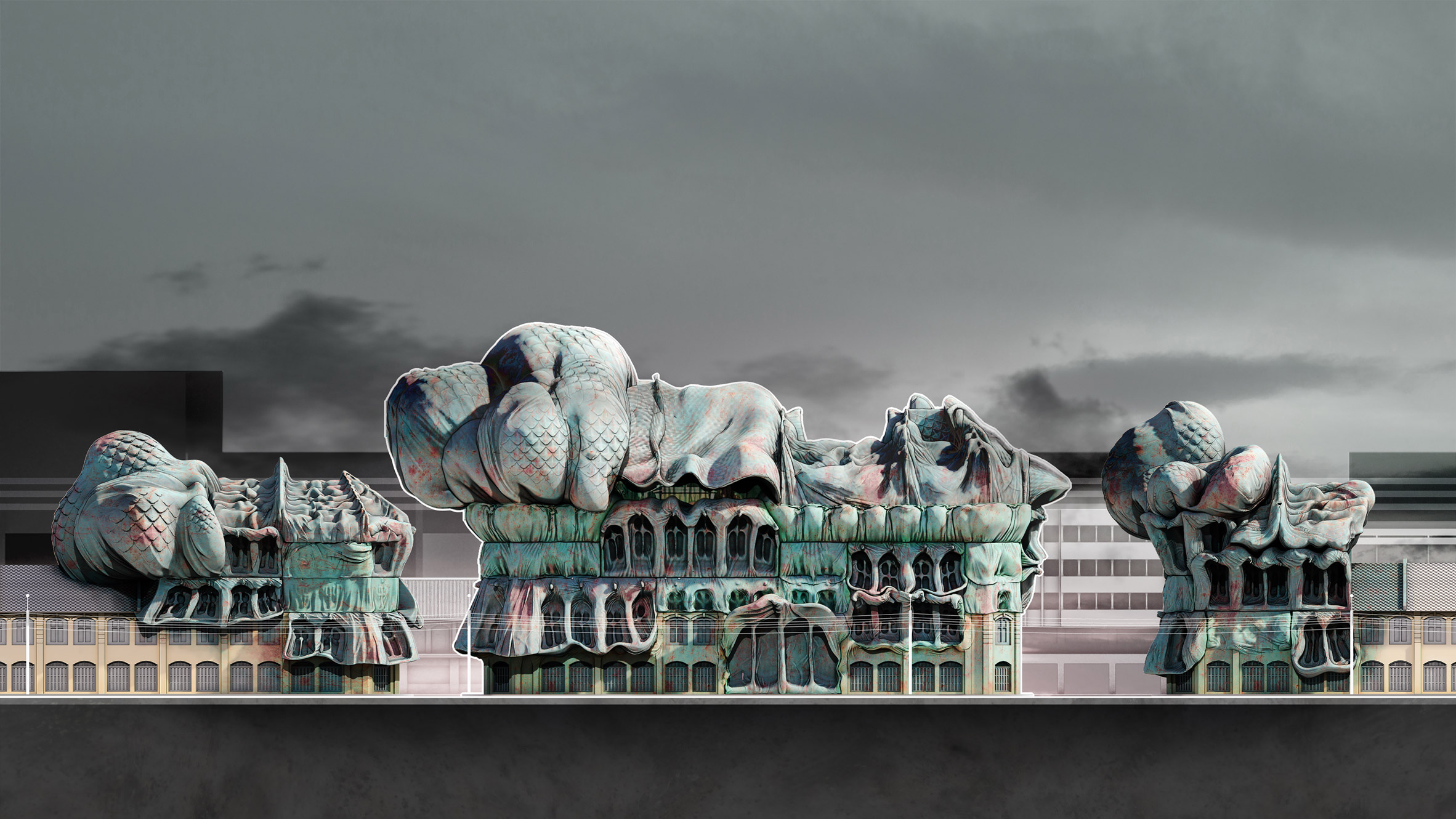 "The project challenges the notion of symbolism and ornament in architectural design. It explores a new typology of a public building, destabilising the increasingly obsolete libraries, cinemas and museums today.

"Instead, this building, its architecture, and its interior apparatus act as an interface between the physical world and the virtual world of the internet.

"Through a series of interactive sensory media rooms and AR and VR devices, visitors interface with information, education, communication, gaming, multimedia consumption, exhibitions and other forms of exchange. It is the spatialisation of the internet in the form of a recontextualised funhouse." 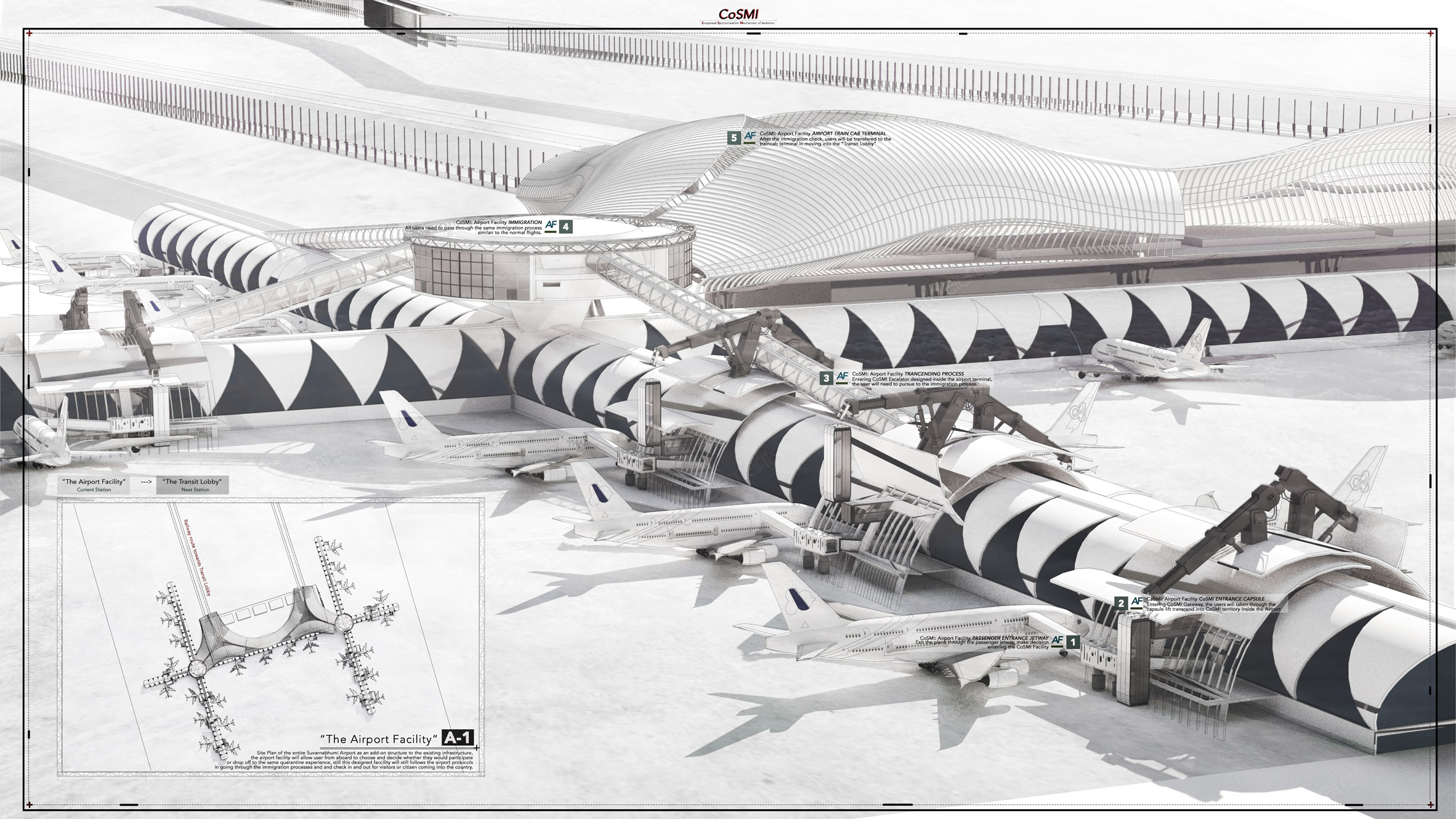 "Quarantine Cities: The Continuous Journey" approaches the civic as an architecture for the instrumentalization of mental and emotional conditions as a consequence of the essential solitary quarantine during pandemic society.

"'Quarantine is a disease towards mental health', explores the possibility of offering 14-days quarantine as a continuous trip where travel is fearless." 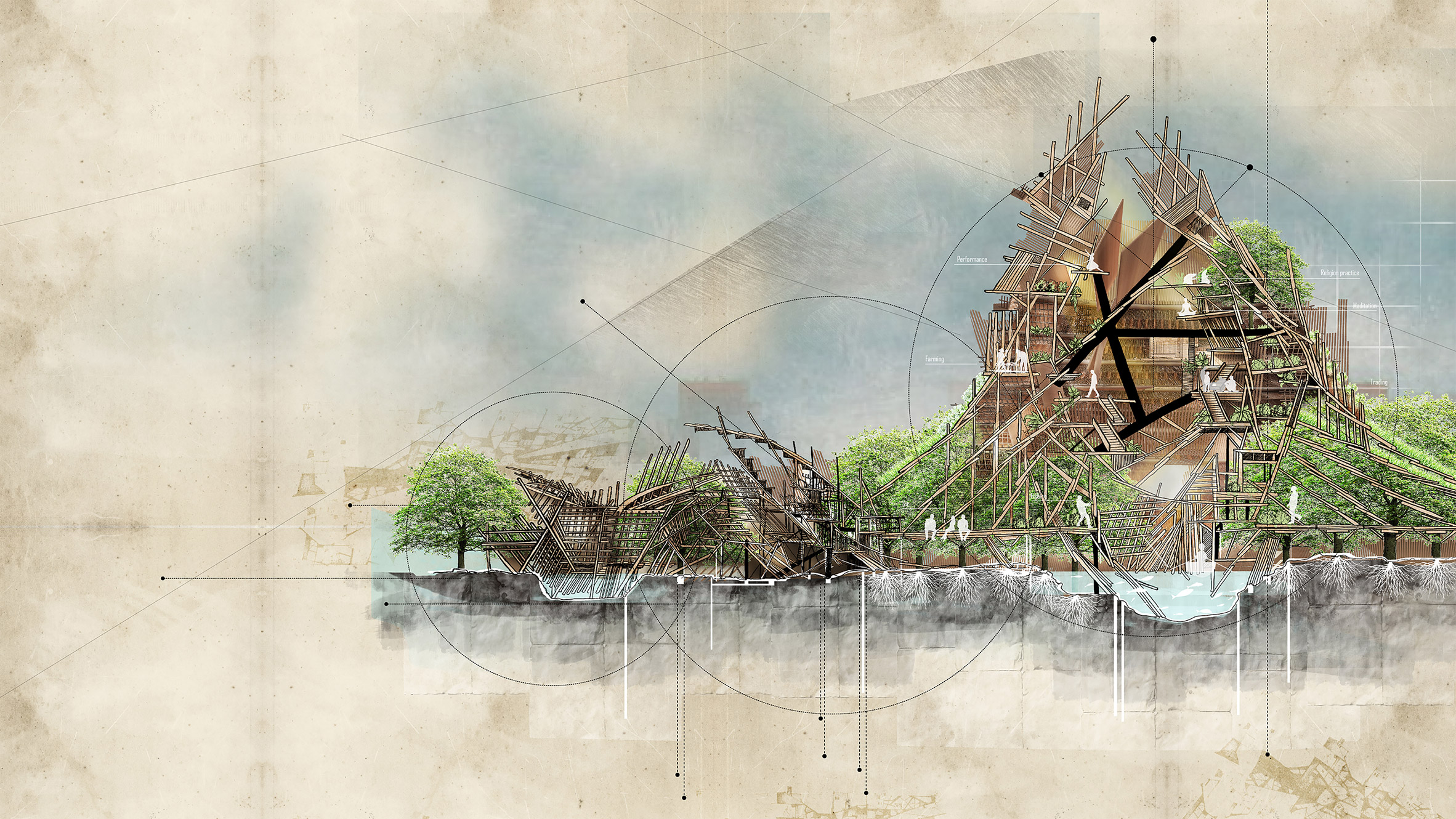 "This era's consummation of 'dryness' has contributed to the rise of inequality throughout architecture and society. Dryness criticizes the in-create disconnection between existing and new builds. This project compares 'wet' and 'dry' design. It explores architectural ideas and modern needs and how theory influences design in the contemporary era.

"It explores the connection between them, discussing the widespread usage of architectural approaches in modern design through the observation from indigenous living in Bangkachao Bangkok. The natural layer is separated from the concrete coating.

"It concludes with the utopian planning proposal, which touches on all the subjects that made the city more 'wet'. The plan was called "fluid design," which included the allocation of the site, the architecture, and the community."

"GoogleExpress is an educational programme situated within a train. It critiques traditional institutions, and is a proposal built off of the upcoming 'Google Institute' with the ambition to disrupt the college degree by launching a new programme on digital citizenship and business start-up.

"Google Culture is embedded in the programme, treating education as a hectic, crash course to be completed together alongside the company, allowing levels of intimacy to be formed in every aspect of life on the train.

"To conquer the train, it strips away schedules, exams and uniforms and  pushes friendships and connections, where the emphasis is not the courses, but a rather hectic sprint towards digital citizenship. Here, trainees are fully in control of their own education."

"Responsible Incinerated Passing (R.I.P.) is a site-specific methodology that aims to offset the carbon emitted into the atmosphere of Bangkok in the process of cremation.

"R.I.P. merges the technology of direct air capture with the sensitivity of Buddhist belief and aims to not only redesign the three existing temple typologies (the temple for The Commoners, The Monks, and The King) to decrease their environmental harm, but also acts as a behavioural guide on how to reduce one's carbon footprint, both before and after your remains are emitted into the sky, in the form of harmless mist rather than smoke."

Dressed for the dead by Pann – Nara Lojanatorn

"This project investigates a range of informal to formal outfits. They are explored through contrasting rituals of the Teochew Cemetery, the everyday routine of a cemetery that has become a public park and an annual gathering place for ancestral worship.

"The typology of the cemetery presents no end. The tomb tiers are developed from traditional tombstone forms and construction, while the wood scaffold facilitates changing activities throughout the years. The visits may cease, but the spirit remains." 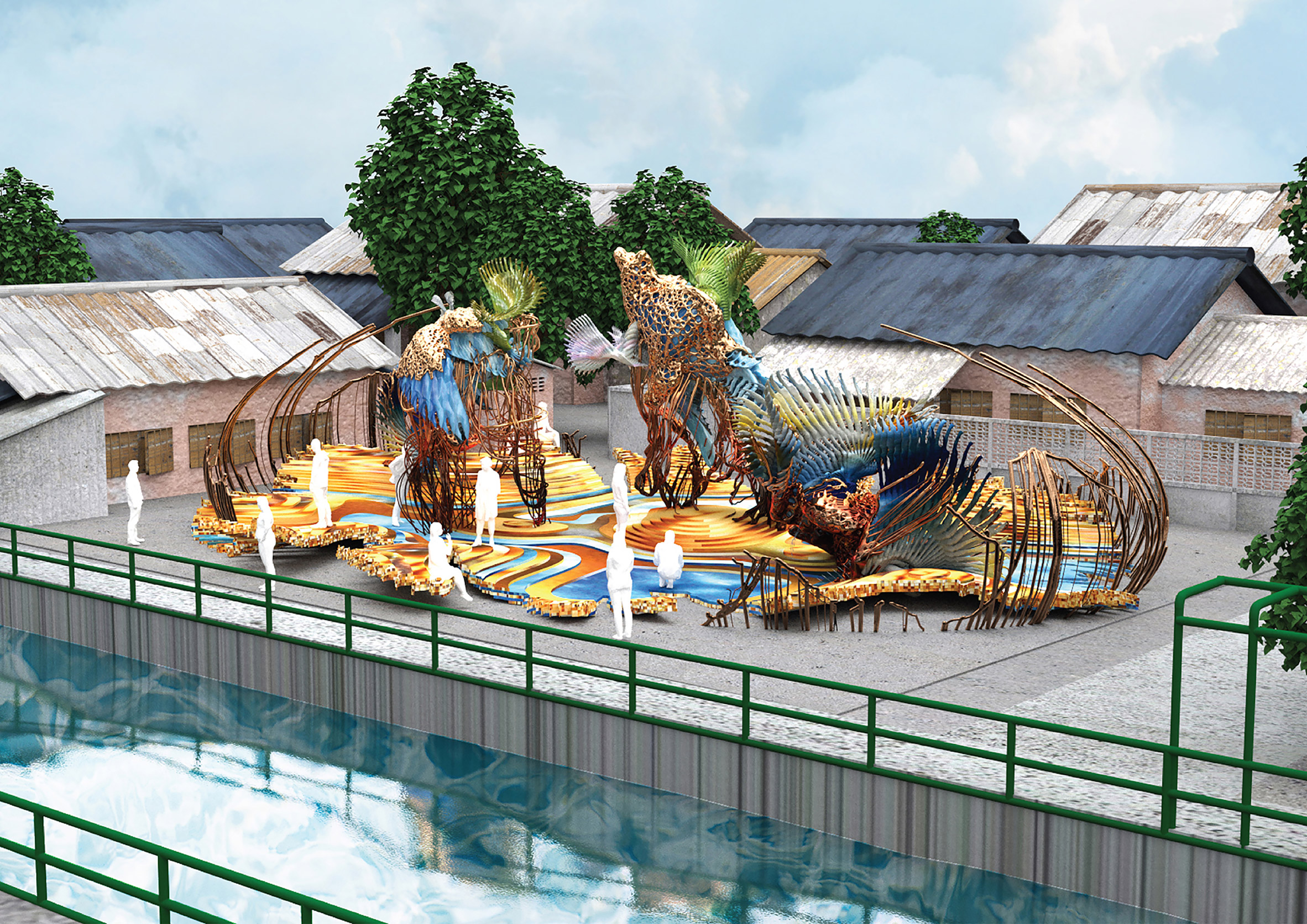 "The Crustacean explores the sea and river species in the Saen Saeb canal and the Gulf of Thailand. It is a series of cabinets of curiosities inspired by exoskeleton sea creatures and the darkness of the polluted canal.

"To express aesthetic sea creatures through digital display in contrast to pollution caused by people living along Saen Saeb canal and to encourage people to take responsibility for our waterways and the ocean.

"The cabinet includes two main displays; the AR texture is hidden in part of the cabinet, and the VR effect for experiencing the whole cabinet creatures come alive in the digital world." 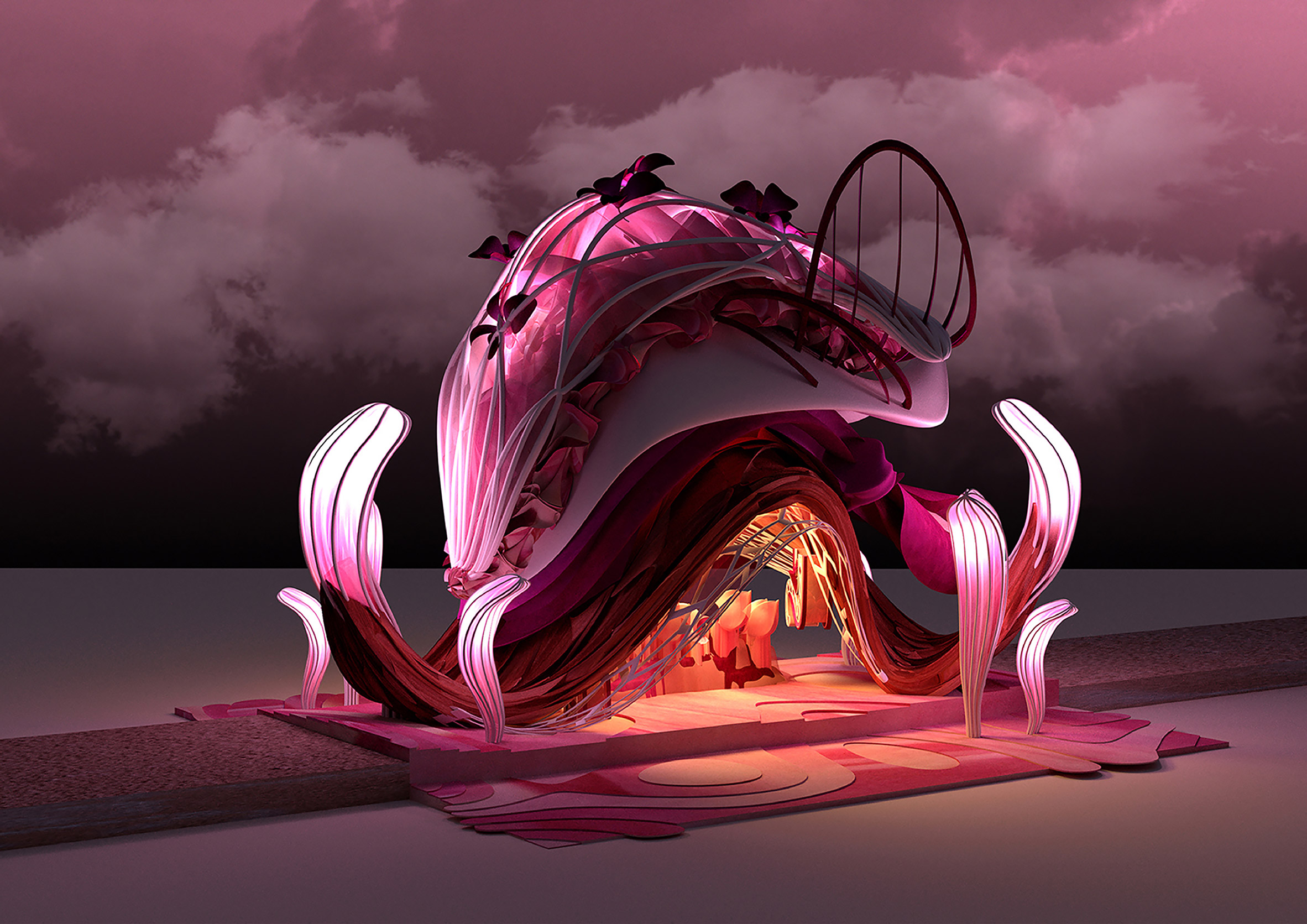 "Every place has character uniqueness, similar to Wat Kheak (Sri Maha Mariamman Temple) Hindu temple. Focusing on transportation and the rotting process of organics offering to the god, The Petal of Time is a kiosk where arrival and departure are waiting for the bus and interacting with flowers.

"The main programmes of The Petal of Time are the bus stop and the flower shop. Providing an opportunity for passengers waiting for the bus, buying flowers, and composting them after use. The essential concept that makes these programmes run harmoniously is inspired by organic transformation."

This school show is a partnership between Dezeen and Chulalongkorn University, Thailand. Find out more about Dezeen partnership content here.