British Prime Minister Boris Johnson's planned lifting of coronavirus restrictions under his government's new "living with COVID" strategy hit a last-minute snag, Reuters reports, as a cabinet meeting to sign off on the plan was delayed and Scottish and Welsh leaders spoke out against it. "Testing has played a pivotal role in breaking chains of transmission and as a surveillance tool helping us detect and respond to emerging variants," said Welsh First Minister Mark Drakeford. "It's essential that this continues."

The effort would make Britain the first major European country to let people diagnosed with COVID-19 work, shop, and use public transport, but would also restrict access to free testing. Johnson said on Sunday that people shouldn't "throw caution to the wind," but that the success of the U.K. vaccination program meant the nation could start relying on personal responsibility rather than government mandates to curb infections. A Johnson spokesman said on Monday that the cabinet meeting was postponed "so that the prime minister could have both a security briefing and to have further meetings to finalize the plan on living with COVID." 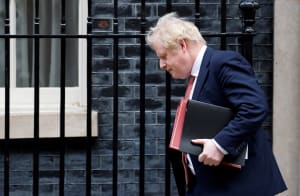